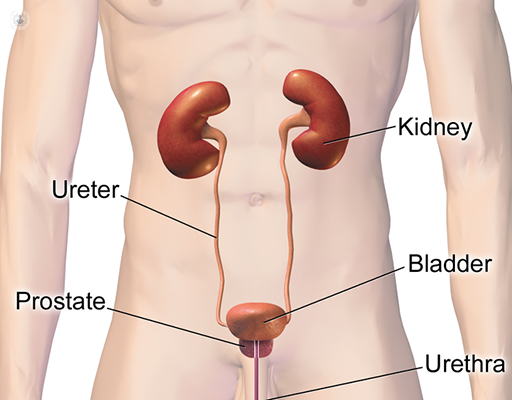 Nephrectomy is the surgical procedure in which all or part of the kidney is removed. It may require:

It is an intervention that is performed under general anaesthesia and usually lasts about three hours or more.

Why is it done?

A nephrectomy is usually performed to treat kidney cancer, but may also be indicated if one of the kidneys has been severely damaged or scarred by other causes and its function is impaired. Possible causes include:

A nephrectomy must also be performed when someone donates a kidney.

What does a nephrectomy consist of?

A nephrectomy can either be performed as open surgery or laparoscopically. Open nephrectomy is less commonly performed nowadays. Both procedures are performed with the patient under general anaesthesia.

Open nephrectomy involves making an incision in the abdomen, and may require the removal of a rib to access the kidney. The surgeon cuts the ureter (the tube that takes urine from the kidney to the bladder) and blood vessels supplying the kidney and removes it, closing the incision with stitches.

Laparoscopic nephrectomy involves making several small incisions through which the surgeon can insert a tube with a camera and small tools to perform the surgery within the patient’s body. The surgeon must be specially trained to perform minimally invasive surgery like this, and may use robotic technology to aid them. If an entire kidney is to be removed, a slightly larger incision must be made, through which the kidney can pass. Laparoscopic surgery usually results in faster healing time, shorter hospital stays, and a lower risk of complication, due to the fact that it causes less damage to the body tissues.

As with any surgery, the patient should follow the doctor’s instructions with regards to what they can eat and drink and if they should stop taking any medications. The doctor should always be told if there is a possibility that they are pregnant.

If donating a kidney, the donor must first be evaluated to ensure their kidney is healthy and that their blood type is compatible with the recipient. This will involve a number of tests in the weeks prior to the surgery.

Before the surgery, a urinary catheter is placed in the patient.

Care after the intervention

The patient will usually remain in the hospital between 2-7 days after the intervention, depending on the type of surgery and their general health. During the hospitalization:

Any cookies that may not be particularly necessary for the website to function and is used specifically to collect user personal data via analytics, ads, other embedded contents are termed as non-necessary cookies. It is mandatory to procure user consent prior to running these cookies on your website.